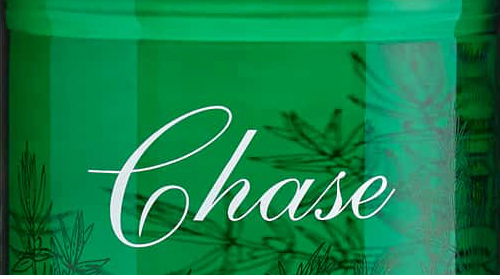 Time for another of our brief but surprisingly informative Gin Tasting Notes!!  Today I’m having a look at Chase GB Extra Dry Gin.

William Chase, owner of the Herefordshire farm and distillery where Chase is produced, was and is a potato farmer.   Frustrated with his treatment as a supermarket supplier, at the turn of the century the entrepreneurial Chase founded Tyrrells Crisps as an alternative way to monetise his crop. Tyrrells quickly became hugely successful and during a 2004 business trip to the USA, Chase happened upon a craft distiller making potato vodka and determined to follow suit.

By 2008, when Chase sold the Tyrrells brand for £30m, the Chase Distillery was nearing fruition.  In June 2008 the first batch of Chase Vodka was distilled and gin production commenced before the end of the year, using apples from the farm’s orchard to create Williams Elegant Gin. Chase GB Gin, which uses the potato vodka as a base, arrived soon afterwards.

The Chase distillery was catapulted to fame in 2010 when they entered their vodka into the San Francisco World Spirits Competition and carried off the Best Vodka gong.  More recently, Chase GB Gin has won a Double Gold at the same competition.

Chase GB Gin is distilled in a Carter Head gin still with 12 classic botanicals including cinnamon, cardamom, angelica, ginger and lemon peel.  The majority of the botanicals are vapour-infused in the Carter Head, but two are macerated in the still, and the recipe includes both juniper buds and berries for maximum effect.

Now, I’m not a vodka fan… but I’m a big fan of Chase Vodka, so this should be even more up my street. Let’s crack on and see what it’s like.

Nose:  Very promising.  Earthy and spicy right off the bat, with gingerbread, cinnamon, cardamom, lemon and liquorice notes all very evident.  The cloves appear with a little time in the glass.

Palate: Medium-full – bigger than I expected for the strength. That lovely creamy mouthfeel that well-made potato spirit always provides. Big juniper and lemon hit, warm earthiness, then rich ginger and cinnamon. The juniper is huge, but balanced by assertive lemon which really persists through the mid-palate with the spices taking turns to flit in and out.

G&T (2:5 ratio, no ice): Really excellent.  The tonic complements the flavour profile perfectly.  Chase suggest a slice of ginger as garnish, but I reckon there’s plenty in the gin already.  Can handle a generous slice of lime as well.

Comment: I generally prefer my gin at 43% minimum, so I was slightly concerned that this might seem a little wishy-washy... I shouldn’t have worried. This is a brash, big-boned gin – subtle it aint, but it’s a great ride. The quality of the base spirit was never in doubt, and it’s been enhanced here by what must be great fistfuls of classic botanicals.  Tremendous stuff.