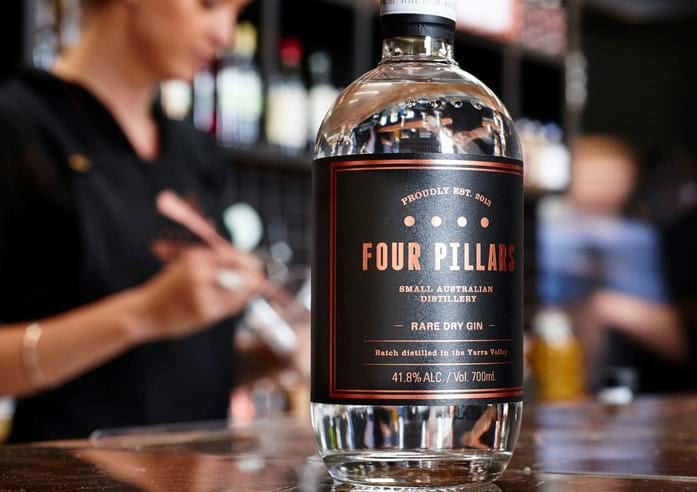 Time to try another of the new wave of gins! This week it’s Four Pillars from Australia’s Yarra Valley, a region better known for its splendid wines (especially Pinot Noir and Chardonnay).  The company made their first crowd-funded batch of gin at the end of 2013, and two years later moved into their own permanent premises in an old timber yard.

Four Pillars now have four of their own German-made CARL stills, with the main stills a hybrid of a copper pot still feeding into a column still.  The column enables them to redistil a sourced base spirit made with wheat to a whopping 94% before dilution. 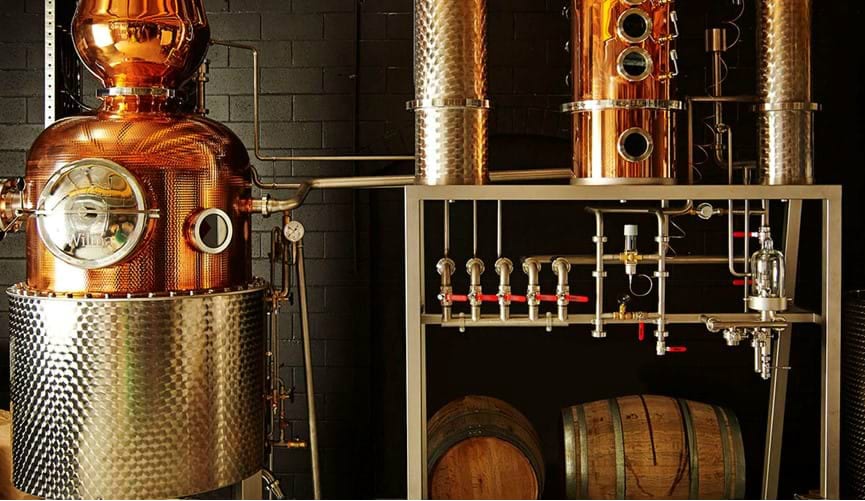 For their botanicals, Four Pillars use Tasmanian pepperberry and lemon myrtle leaf, plus traditional botanicals including cassia, cardamom and coriander seeds.  The company’s signature innovation is the use of fresh oranges, which are placed in a basket inside the still and steamed by the alcohol vapours during distillation.

Four Pillars have expanded relatively rapidly, and now produce several different gins in the range, including the standard Rare Dry Gin, plus a Navy Strength edition bottled at 58.8%, a Barrel-Aged expression, a Spiced Negroni gin aimed at bartenders and, most intriguingly, Bloody Shiraz, for which fresh Shiraz grapes are macerated in the gin for two months to create a sweet, spicy flavoured gin.  In March this year Four Pillars sold a 50% stake in the business to Australian food and beverage company Lion, a subsidiary of drinks giant Kirin Holdings.

Today we’re trying the Rare Dry expression – let’s see if it lives up to the hype.

Nose: A woody, spicy profile initially, with the juniper taking a back seat while cinnamon, earthy notes, cardamom and anise hold forth. There’s some pinesap notes as well, then zesty citrus aromas, a lavender floral note and a pleasing, almost vanilla-esque creaminess.

Palate: Mediumweight, with that creamy note translating into a soft, luscious mouthfeel.  The juniper is restrained again, but it’s there, this is definitely a gin. The floral notes come and go quickly, along with the anise before the citrus arrives. The citrus is more noticeable on the palate than the nose, with strong flavours of cooked oranges and fresh, wet, earthy notes, plus woody spices from midpalate.

G&T: (2:5 ratio, no wedge) Light citrus and floral notes with depth and heft from the woody elements. Refreshing, of course, but there’s depth and complexity there if you’re in a contemplative mood.

Comment: A very good all-rounder.  It’s a modern style, a few steps away from a classic London Dry, but the botanical blend is well-judged, the fresh citrus is very appealing and the spirit is very high quality.  A hit.