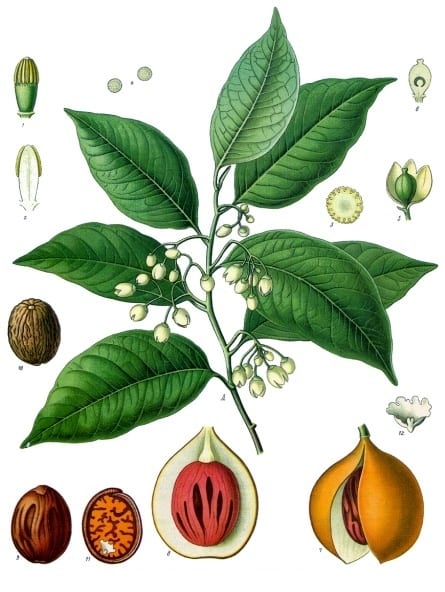 Geography: Nutmeg is native to the Moluccas, the Spice Islands of Indonesia – where its value led to atrocities and war between English and Dutch traders – but is also cultivated in China, Malaysia, India, Sri Lanka, Grenada and South America.

Characteristics: Myristica fragrans is a tall evergreen tree with dark green pointed leaves and small bell-shaped yellowish-white flowers.  The tree can grow as high as 30m.

Nutmeg and its sister spice Mace are both derived from the seed of the Myristica fragrans fruit, a small fleshy oval not dissimilar to a green plum. Mace is made by removing and drying the skin (aril) covering the seed, while nutmeg is the dried seed itself, usually ground into a powder.

The flavour of nutmeg is sweet and earthy; in gin the spice adds a noticeable heat and a long, spicy sweetness to the finish. 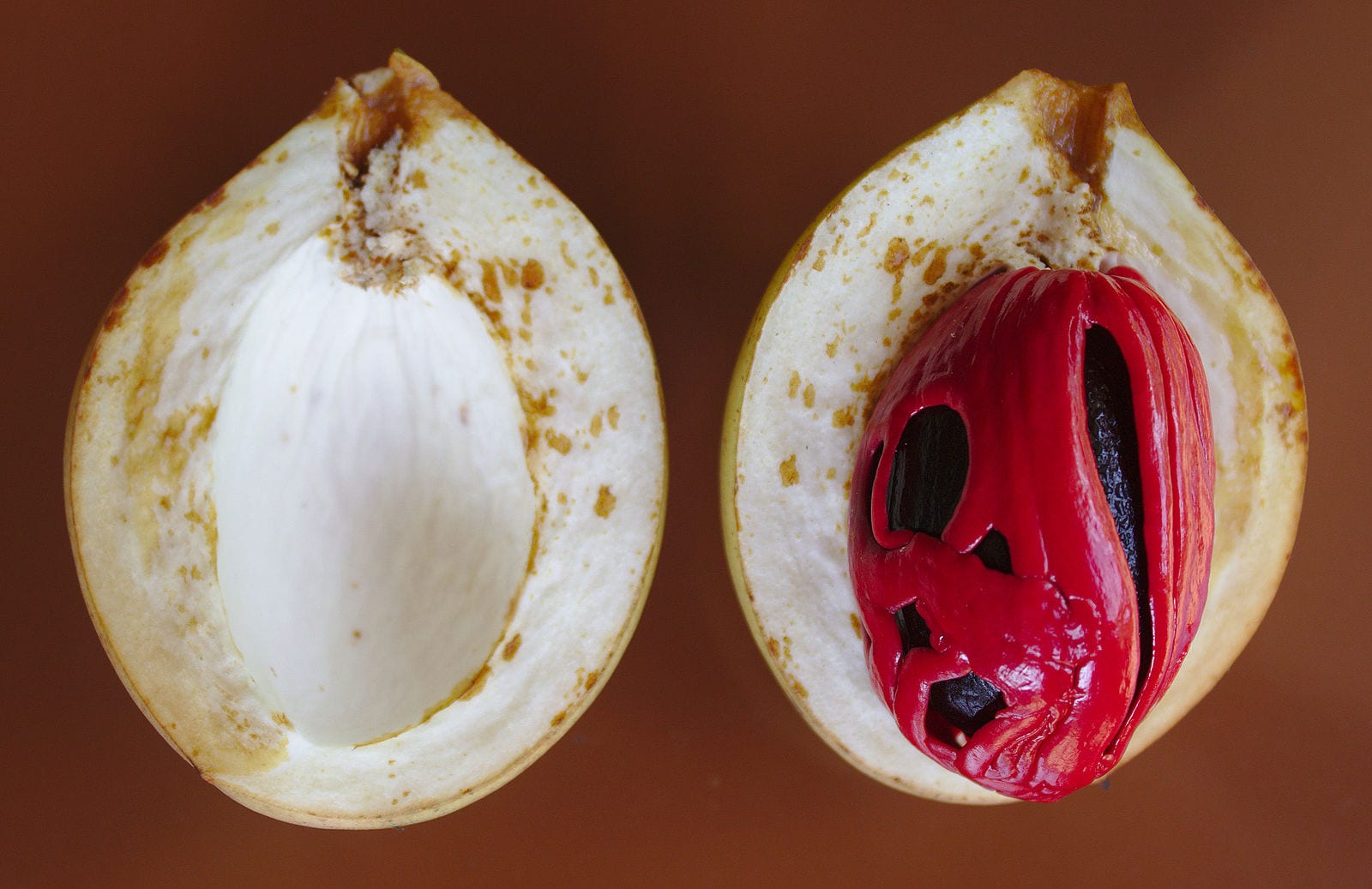 A nutmeg fruit split to show the seed and the red aril from which we get mace.

Other Uses: Nutmeg is widely used in world cuisine. In Indonesia it flavours many soups and beef stews and it’s used in both sweet and savoury Indian dishes; the Americans use it in pumpkin pie, the Italians use it in tortellini, the Scots use it in haggis and in Europe it is commonly used to flavour baked goods, vegetables and sauces.

In drinks, nutmeg is used to mull wine and cider, to flavour eggnog and as an ingredient or garnish to many Caribbean cocktails and rum punches.

The essential oil of nutmeg, obtained by steam distillation, is laden with complex terpenes and potent organic compounds known as phenylpropanoids which are widely used in the perfumery and pharmaceutical industries.  One of these, known as myristicin, is highly toxic (particularly to dogs) and is known to cause allergic reactions, convulsions, nausea, dermatitis, hallucinations and, in cases of extreme overdose, the very occasional death.  The oil itself is used as a substitute for nutmeg powder in syrups, toothpaste, sweets and baking.

As with all spices, and despite having no known medicinal attributes, nutmeg is widely recommended in folk medicine and modern ‘alternative’ pseudo-health woo for complaints including rheumatism, inflammation, insomnia, muscle pain, sores, digestive issues, depression, fatigue, stress, acne, Alzheimer’s, diabetes, ‘toxicity’ and, of course, cancer.

Contained In: Nutmeg is very popular as a botanical.  A few of the most prominent gins that use it include Portobello, Oxley, Boodle’s, Sacred, Hayman’s, Martin Miller and Monkey 47.