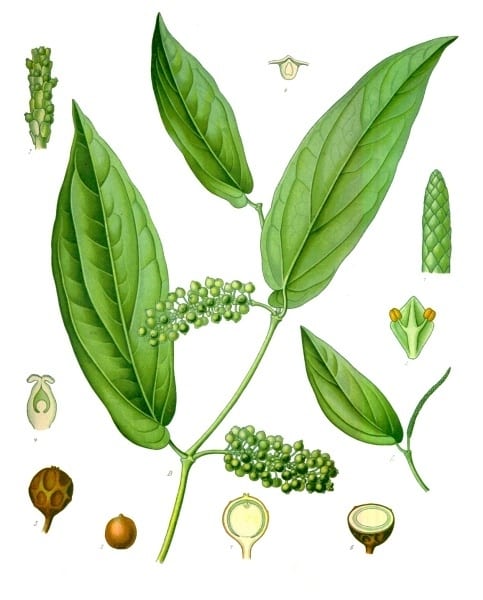 It’s time for another of our informative, educational-but-still-quite-fun Gin Botanical Profiles! This week: Cubeb Berries…

Characteristics: The cubeb plant is a perennial vine with pointy, oval leaves and white flowers.  The berries, which are the relevant part for us, are brown and contain hard, oily white seeds.  Cubeb berries are dried for commercial purposes. They closely resemble scaly or wrinkled peppercorns, but the stalks are generally left on – hence the name ‘tailed pepper’.

The taste of cubeb berries is somewhere between pepper and allspice, with a trace of nutmeg or camphor. In gin, cubeb generally manifests as an aromatic pepperiness, but it’s also capable of contributing lemon, pine or floral notes. 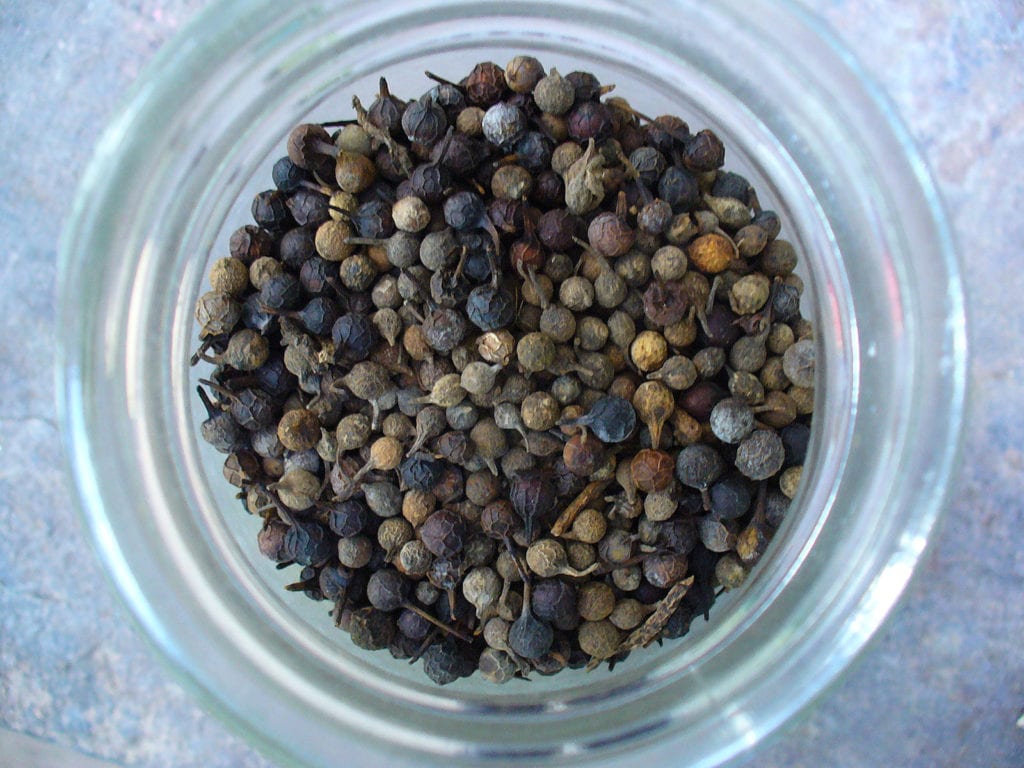 Other Uses: As well as gin, cubeb is also an ingredient in Pertsovka, a fiery Russian vodka mainly flavoured by chilli peppers.

Cubeb is an important ingredient in Indonesian cuisine, particularly in Javanese curries. It can be used as a condiment, either mixed with or as an alternative to black pepper, or as an ingredient in spice mixes.

Culinary use of cubeb was common in Europe from the 14th century, but dropped dramatically around 1640, when the King of Portugal banned its sale to promote black pepper.  Prior to that it was frequently used as a seasoning, in baking or as an ingredient in marinades. Cubeb is still used in Moroccan cuisine, particularly in baking and in some versions of the spice mix Ras el hanout.

In both Chinese and Catholic mythology, cubeb is believed to ward off demons and evil spirits, while the Arabic world considered it an aphrodisiac, probably because of its frequent use in traditional medicines as a diuretic and for digestive ailments, urinary tract infections and the treatment of gonorrhea.

Indian Ayurvedic medicine considers cubeb valuable for oral hygiene, while Tibetan medicine believes it to be beneficial to the health of the spleen.  The 17th century English botanist Nicholas Culpeper, meanwhile, wrote that cubebs were “hot and dry in the third degree… they cleanse the head of flegm and strengthen the brain, they heat the stomach and provoke lust”.

Fun Facts: In The Book of One Thousand And One Nights, cubeb is mentioned – along with hashish, opium, honey and various gin botanicals including ginger, cardamom, cinnamon and clove in a recipe for an aphrodisiac to cure infertility, while in traditional Perso-Arabic Unani medicine, a cubeb paste is recommended to be rubbed on the genitals to increase sexual pleasure.

Cubeb enjoyed a medical renaissance in Europe during the Victorian era, when its oil was used in various medicines and lozenges for throat complaints, as well as in ‘medicinal’ cigarettes recommended for asthma and hay fever sufferers (!). Cubeb cigarettes were available in the UK until at least the 1940s and cubeb oil is still used as a flavouring in some cigarettes to this day.