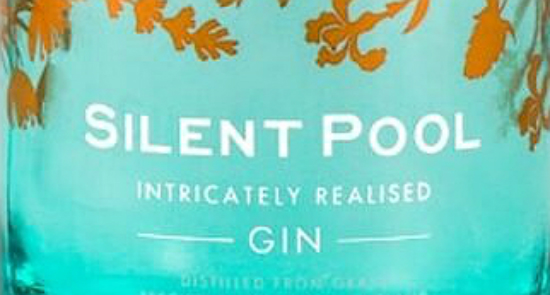 Time for another of our brief but informative gin reviews! This week it’s Silent Pool Gin, an independent distillery based in Guildford, Surrey, who began production in 2014.

Silent Pool distil their spirit in a Holstein copper potstill powered by a vintage wood-fired steam boiler (it says here) before rectification in a ten foot column still.  The final spirit is around 90% abv before dilution to 43% with spring water from the local lake the distillery is named after.

Silent Pool use a whopping 24 ingredients in their botanical recipe. Some of the more interesting of these include dried pears, bergamot, chamomile, rose petals, linden, elderflower and even honey sourced from the neighbouring vineyard’s beehives.

The botanicals make their way into the spirit via separate processes – some are macerated before distillation, others hang in a basket inside the potstill and some of the more delicate ingredients undergo a separate high strength maceration referred to as a Gin Tea Infusion before being added into the potstill and redistilled.

In addition to their standard gin, Silent Pool also make a high strength 57% gin called Admiral Collingwood Navy Strength and two flavoured gins – a Damson ‘Gin’ at 30% and an English Rose Gin at 42%, which sounds rather promising. They also make an Apricot Amaro and a Blackberry Gin Cordial, the latter of which sounds like just the ticket for an extra-ginny Bramble cocktail.

There’s also a couple of rye grain vodkas, but this isn’t The Vodka Lounge (thank f*ck) so we’ll leave that alone.  Incidentally, there’s no detail on the website about whether the base spirit is homemade or sourced (which I don’t really care about), or which grain is used (which I do like to know, but never mind).

Silent Pool has won a clutch of awards, most recently a Gold Medal (Ultra-Premium) at the Spirits Business Gin Masters. Let’s crack on and see what this is all about.

Nose: A rich, deep cluster of aromas – the bergamot jumps out, then some more lemony citrus and cardamom.  There’s a very profound earthiness, presumably angelica and orris, enhanced by cinnamon, then a hint of candied ginger. Becomes both floral and peppery with time in the glass, which shouldn’t work but does.

Palate: Medium-full, with a gentle mouthfeel. Ah, there’s the pears – I missed them on the nose and was disappointed, but they’re there straight away on the palate.  They’re enhanced by a lovely sweetness from the honey, with a floral note of rose and lavender which grows in influence through the mid-palate. There’s still plenty of junipery goodness too.

G&T: (2:5 ratio, no ice) Just delightful. Aside from the juniper, the lavender, bergamot and earthy notes sing loudest.

Comment: A tremendous gin. I doff my cap to the skill required to achieve such a balanced palate from such a long list of ingredients without making a confusing mess – one can only imagine the experimentation that took place to achieve it.  I would love to taste this gin at 46-48%, I’m sure it would be even better.