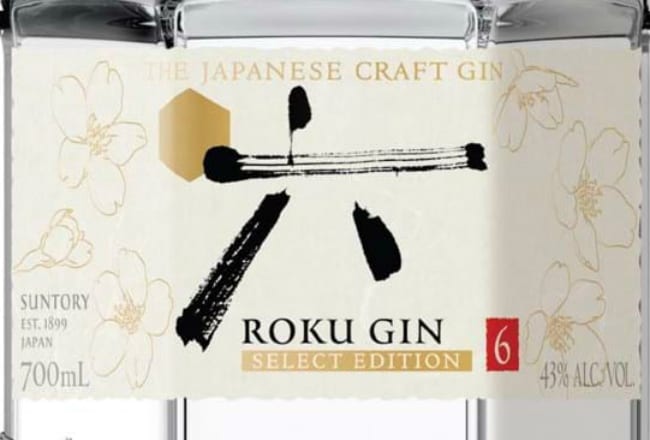 Suntory is Japan’s oldest whisky company, owning the historic Yamazaki and Hakushu malt distilleries, as well as the Chita grain distillery.  However, the company has many fingers in distilling pies around the world, mainly in whisky – they own several distilleries including Jim Beam, Bowmore and Laphroaig.

Gin-wise, Suntory owns the Spanish brand Larios, and craft gin Sipsmith, a more familiar name to most UK gin-lovers.  Suntory previously produced another Japanese gin called Hermes as far back as 1936, but the brand was discontinued in 1980.

Roku Gin was introduced in 2017, originally as a travel retail exclusive, and is Suntory’s first internationally-available Japanese gin of modern times.  The brand was an immediate success and has been rolled out to various international markets; Roku is widely available in the UK, but today I’m tasting Roku Select Edition, which is the current travel retail version and is said to have more of an emphasis on Sakura in the botanical mix.

Which brings us to the botanicals: the name Roku means ‘six’ in Japanese, and derives from the six signature Japanese botanicals that are added to a traditional eight-botanical base recipe.  The bottle, incidentally, also has six sides to reinforce this point.

The six signature botanicals have, it says here, been chosen to represent the four seasons and include Sakura leaf and Sakura flower (Spring, apparently); Sencha tea and Gyokuro tea (Summer); Sansho pepper (Autumn); and Yuzu peel (Winter).  The signature botanicals are distilled separately in different pot stills according to their individual characteristics and needs and are then blended with the base gin.

With regards to the origin of the spirit, I haven’t been able to confirm the source, although a neutral spirit from the Chita grain distillery would seem the most logical, at least for the base.  For the potstill stuff, I note that Yamazaki distillery is between Chita and Osaka, where Roku is blended. Just speculation, mind. 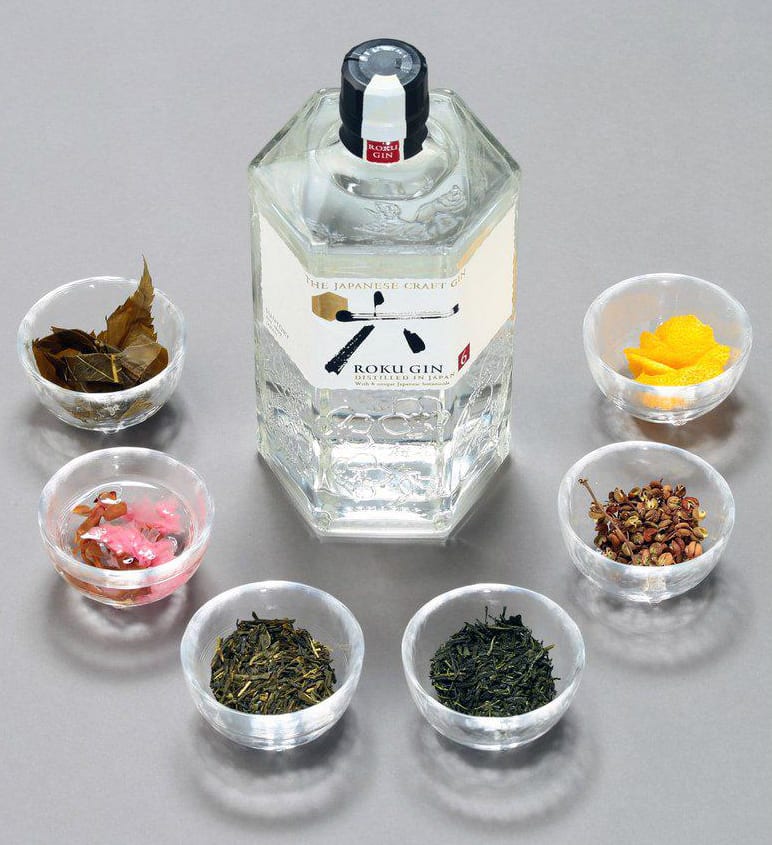 Roku with its six signature botanicals

Nose: Good initial juniper waft, then a floral note (presumably the Sakura), hints of limey citrus and then spice and an earthy base note.  With time in the glass, the floral note re-emerges alongside marshmallows, cardamom, pepper and some sweet cinnamon.

Palate: Weight-wise it’s pretty full, with a wonderfully heavy, oily, luscious, creamy mouthfeel, which might lend weight to the Chita theory – the distillery’s base grain is generally corn. The juniper is easily distinguishable, though less prominent than on the nose; a pleasing spicy, peppery tingle from mid-palate, with a great interplay of citrus, pine and earthy notes.

Finish: Long, soft and warming, with cardamom and pepper; the floral and citrus notes finally emerge towards the death as the spices fade.

G&T: (2:5 ratio, no wedge) Earthy, with a hazelnutty note and some of that (possibly) corn sweetness; the juniper is still distinguishable and there’s some sweet citrus akin to lemon sherberts.  Very nice. With my preferred lightly-squeezed quarter lime garnish, as expected it’s even better, the citrus lifting the floral notes.

Comment: Whatever the provenance of the spirit, Roku Gin is tremendous stuff: a judicious botanical selection and the trademark Japanese precision of craftsmanship – it sounds ridiculous to call something produced on such a scale ‘craft’, but as with their whisky, the Japanese manage it. Bravo!

Recommended Listening: A new feature, because why the heck not.  I listened to the excellent Poltergeist by Moshuss and Hanses: laidback instrumentals constructed entirely from Japanese samples.